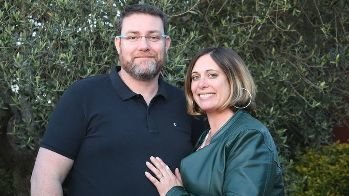 Marie and Yann Bonnet are not only a few of Southern California’s newest residents, but they are also two of Showhomes’ newest franchisees. The couple, along with their three children, recently relocated to the greater San Diego area all the way from Toulouse, France, and shortly after began their journey with the full-service home management and staging franchise.  Showhomes franchise marks the brand’s second business serving the San Diego market.

Thanks to Showhomes’ family-like atmosphere and proven business model, the Bonnets were able to make their version of the “American Dream” a reality.

The Bonnets’ journey with franchising, and Showhomes in particular, ultimately stems from their decision to move to the United States. “Last year, we made the decision as a family to move to Southern California with an investor visa,” Marie said. “It was a great opportunity for a career change for my husband and a new challenge for me. Moving to a new country also gave our sons the opportunity to discover a brand new culture.”

“So, based on our situation [relocating from Europe], Yann and I decided that investing in a franchise would give our family the best opportunity to succeed,” Marie continued. “We spent a lot of time working with a consultant to find the right franchise for us. When we were presented with Showhomes, it was by far the best option. The company is a true family that provides support and a proven business model. Moving to the U.S. and starting our own business has always been a dream for us; we believe that the American dream still exists!”

Yann echoed Marie’s sentiment on their decision to franchise with Showhomes. “Franchising provides a secure framework for those who are new to the business to follow,” he said. “Showhomes provides a level of quality and service to each client as well as provides a sense of family and community to each of its franchisees.”

It’s safe to say that Showhomes was just what the Bonnets were looking for to begin their new journey in the U.S., though before they made the life-changing decision to leave their home country, the previous career each held prepared them for their future with the brand.

Early on, Marie began working as a designer in the Parisian fashion industry but quickly realized the fashion world wasn’t exactly where she wanted to be. After a few years in fashion, Marie switched careers and began working in home design and renovation, spending the last 10 years providing home design and consulting services in Paris and Geneva, Switzerland.

“Working in this industry was much more aligned with my interests, both personally and career-wise,” Marie said. “I developed a real passion for home design and renovation and knew it was exactly what I wanted to be doing.”

Yann, on the other hand, spent most of his career in aviation. He earned a Master’s degree in Mechanical Engineering and held a number of positions with different aviation companies, the most recent of which was at Satys in Toulouse, as the Managing Director of Aerospace Interiors, overseeing the complete design and production processes.

Reflecting back on his decision to work with Showhomes, Yann noted that after 15 years in the corporate world, he was ready to take on a new career challenge—and one that he would personally own at that.

The Bonnets joined Showhomes at a prime time. Now with more than 50 locations nationwide, Showhomes is rapidly becoming the premier home staging and management company in the country. In June of 2019, the brand underwent a major repositioning where it expanded its revenue streams from two (home staging and home management) to four (home staging, home management, home restyles and updating), redefining itself as a full-service solution for its clients. Furthermore, this repositioning helped Showhomes mark a 30% increase in year-over-year sales through November 2019.

Looking to the future, the Bonnets have big plans to conquer the San Diego market. Although Showhomes already has a franchisee in the area, they look at this as an opportunity rather than a challenge. “San Diego is a huge market for home staging and renovations,” Marie said. “Our goal is to provide that same level of high-quality service that the current San Diego franchisee and the brand as a whole, works tirelessly to provide.”

Additionally, the Bonnets plan on ramping up their business as fast as possible. San Diego is a competitive market, and, according to Yann, the couple is extremely excited to get things up and running successfully. Yann also noted that, as of right now, their focus is on conquering their specific market and expansion will come later.

The start-up costs for a Showhomes franchise range from $60,550 to $103,000, with an initial franchise fee of $39,900. To learn more about franchising with Showhomes, please visit https://www.showhomesfranchise.com