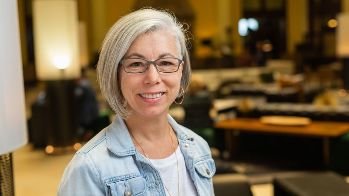 Since August of 2017, Catherine Chandler has been running her Showhomes business in Portland, Oregon–and thriving. Chandler always had an eye for design, and though she’s gone down several career paths, Chandler was always itching to begin her own business. Thanks to the premier home staging service brand, Showhomes, Chandler cites this opportunity with the franchise as “a major dream come true.”

Showhomes has helped homeowners sell more than 30,000 residential properties worth more than $10 billion. Thanks to a history transforming empty high-end homes into a furnished and welcoming abode, Showhomes is the one-stop-shop for home staging and redesign. The franchise has locations across 18 states with over 50 offices nationwide. Showhomes has also been featured and recognized by prominent media outlets such as Oprah, DIY Network, the Travel Channel and HGTV. The home staging company boasts both real estate and design expertise—skills in which Chandler excels on a daily basis.

Chandler doesn’t refer to herself as the “typical Showhomes franchisee” because of her extensive background in science and technology. After obtaining a Bachelor’s and Master’s degrees in the field, she became a technical program manager for a tech company. Chandler also dabbled in the publishing industry as a page designer and in the world of retail as a visual merchandiser.

Throughout Chandler’s and her husband’s marriage, she has bought and sold five homes—all five of which were staged to perfection.

“I’d always get compliments on my setup when I staged my houses,” said Chandler. “My husband kept joking and pushing me to start my own staging business.”

When January of 2017 came around, Chandler’s husband wanted her to know he wasn’t joking. One night while watching HGTV, he popped open his laptop, Googled “home staging franchise,” and signed her up for an informational phone call without Chandler knowing.

“All of a sudden I get a phone call the next day from Showhomes and as soon as they started telling me the whole concept of the company, I was interested,” said Chandler. “It’s my husband’s fault that I’m in this business–but hey, it worked out.”

Four months later, Chandler purchased the franchise and has been managing Showhomes Portland West since August of 2017 when they opened for business. Thanks to the city’s hot real estate market, Showhomes has been flourishing in Portland, so much so that Chandler’s interested in opening a Showhomes location in Southwest Portland as well.

“Portland understands the value of staging,” said Chandler. “Before joining Showhomes, I called other big-name staging companies in the area and asked if they thought there was room for more home staging businesses–they all told me there was plenty of room. I knew there was business to be had.”

Chandler’s good eye made her a perfect fit for a Showhomes franchise, but she still encountered learning opportunities; she claims that her biggest challenge getting started was learning how to build the brand and make people aware of Showhomes. Chandler does a tremendous amount of networking through Portland’s real estate and charity events–from offering to set up booths or tables, Chandler’s main priority is having that face-to-face interaction with potential new clients.

“No one knew what Showhomes was and I consider 50% of my job to be educating people about who we are and how we can make their lives easier,” said Chandler. “Building relationships is the single biggest part of my job.”

In just a little over two years, Chandler has already accomplished so much with the franchise. At this year’s Showhomes annual conference, Chandler was named Rising Star Franchise and awarded Best in Traditional Staging Design and Director’s Choice Award for Superior Customer Satisfaction.

“I’m a very competitive person and I’m always looking at what other staging companies are doing to see how I could do it better,” said Chandler. “I knew I could do it, so it’s super exciting.”

Believe it or not, Chandler’s been able to use her skills obtained through her science degrees in her Showhomes business. She claims her problem-solving skills and engineering background have not only helped create beautiful spaces, but aided her in connecting with those of her clients with backgrounds in the engineering field.

“We have a lot of homeowners–high-end homeowners. to be exact–who are engineers themselves, and it puts my clients at ease knowing they’re talking to an engineer,” said Chandler. “Portland has a huge tech market, so many of my clients work in a similar field that I’m very knowledgeable in.”

Chandler looks forward to expanding Showhomes in the Portland area and building more relationships with her community as she continues her successful business with the home staging franchise.

“My whole job goes back to building relationships,” said Chandler. “Every person I interact with could be my next client. You never know where the next big deal is going to come from, so I treat everyone with white-glove service—so far, it has paid off.”