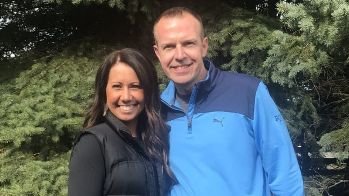 Husband-and-wife
team Michael and Renee Douglas met several years ago while working in the
logistics field at the same company. Now, they’re preparing to enter a whole
new industry together with full-service home management and staging franchise Showhomes.

The Douglases
looked at other concepts when they decided to go into franchising, prioritizing
finding the right culture fit. After working with a franchise consultant and
exploring a few different sectors, Showhomes stood out
because of how the brand touched upon each of their respective passions.

“I have a big
interest in real” Michael said. “Renee really enjoys decorating and
the staging piece of it. She really enjoys making our home look nice. She also
did some of this work at our other company, decorating the office and
remodeling.”

Showhomes also gave
the Douglases a much-desired family feel, plus a sense of strong support.

“The company
we come from has a family atmosphere and that was definitely the sense we got
at Showhomes,” Renee said. “The leadership team has been great.
They’ve been setting everything up for us to make sure we’re doing the right
thing and keeping us on track.”

The Douglases
recently signed on to kick off the brand’s Michigan presence with the state’s
first Showhomes business in the city of Northville, currently slated for a
January 1, 2020 opening date. In addition to Northville, Michael and Renee’s
Showhomes franchise will serve the nearby cities of Birmingham, Novi, Plymouth
and more. The new venture is a joint effort that Renee will enter full time
while Michael will split time between Showhomes and his current job.

“I’ve always
been the one behind the curtain,” Renee said. “I like to organize
things; I don’t need to be onstage. I want to see the reaction from the
customers we help. I love it. It makes me feel so good knowing I did such a
good thing.”

Michael and Renee
aren’t total strangers to the world of franchising. Renee’s father owned a
franchise with the sub sandwich chain Blimpie. She loved how working in the
store led her family to form strong connections in their community and is
excited to bring that same energy and enthusiasm to Showhomes.

“I’m most
excited about making a difference and helping people,” she said.
“It’s different when the business is your own. Your mentality is
different.”

The Douglases are
joining Showhomes at a prime time. With more than 50 locations nationwide,
Showhomes is quickly becoming the premier home staging and management company
in the U.S. The brand had several
successes in 2019, including an expanded service offering that includes home
design and renovation services. Thanks to this, Showhomes experienced a
year-over-year sales increase of 30% through October of this year.

While their current
focus is set on getting their new business up and running successfully, the
Douglases are open to expanding
with the brand. When the time for expansion does come, they are hoping to
expand into territories that cover the Detroit area.

“Expanding is
not out of the question, but our territory is pretty large and it has a good
amount of homes and opportunities, so if we do expand and open more franchises,
it’s going to be a while,” Renee said.

They will certainly
be busy, and not just with business. Like many
Showhomes franchisees, the Douglases are actively involved in their community.
They’ve participated in a variety of philanthropic efforts, including cancer
drives and Christmas-related initiatives, and support the C.S. Mott Children’s
Hospital, which is part of the University of Michigan Health System in Ann
Arbor, as well as at local elementary schools. Renee even ran the culture team
and philanthropy efforts at her previous job. She and Michael plan to continue
being involved in philanthropic efforts through their Showhomes franchise.
Plus, with three sons ages 9, 6 and 4, they are looking forward to having more
flexibility with their schedules.

“I’m excited
about this new venture,” Renee said. “I’ve been in the corporate
world for more than 15 years so I’m very excited to have a little bit of
freedom with my kids and my job.”

To learn more about
franchising with Showhomes, visit https://www.showhomesfranchise.com/