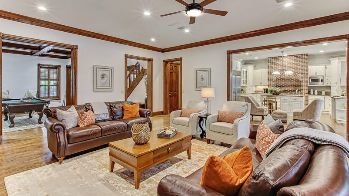 Whether the listing is a $450,000 Miami condo or an $100 million Malibu mansion, hiring a home staging company to stage a property before it’s listed is a necessary task when listing a luxury home. Former NFL player Tim Tebow found this to be true this past year when Jim and Kay Biby, owners of Showhomes of Jacksonville, Florida, helped him sell one of his homes in the area.

Before joining Showhomes, the Bibys both had long and successful careers in the automotive and insurance industries. While attending church on Sunday in the late 90s, the couple met the owners of Showhomes in Jacksonville who were thinking of retiring and selling their business. In that moment the Bibys saw an opportunity that would allow them to become business owners. Showhomes partners with agents and homesellers by providing guidance, support and staging services form homes about to be listed on the market.

“I love putting a house together and seeing the results. I’ve always enjoyed interior design. I love standing back and seeing the finished results,” said Kaye. “We’ve owned our franchise for almost 15 years now, and being able to be our own boss has been a tremendous experience. When I complete a project and then get the call from the realtor and she says the home is sold? It is the best part of the job.”

In April 2020, the Bibys were contacted by an agent they often work with about a home that needed some help. This particular property happened to be Tim Tebow’s home in a gated community in Jacksonville.

Tim Tebow grew up in the Jacksonville area and has strong roots in Florida. He was a Heisman winner at the University of Florida before he was drafted by the Denver Broncos in 2010, where he led the team to a playoff win in 2011. He has also played for the Jets, Patriots and Eagles. These days,Tebow has traded in his pads for a bat. Just this past month, he announced his retirement from playing with the Mets Organization and also serves as a college football analyst on ESPN’s SEC Network.

In 2019, after listing his property in Glen Kernan Golf & Country Club, Tebow purchased one in the same community just a mile down the road. Later that year he had the task of selling the 6,500-square-foot home, and his agent explained the many advantages to staging a home before it is listed. The agent strongly recommended Showhomes based on the Bibys success, and once retained they wasted no time crafting a plan to make sure that this property would make a great first impression on potential buyers.

“This was a home that was, at one point, featured in Southern Living. We knew we wanted to bring out the home’s southern charm,” Kaye said. “It already had some furniture in it, we were just brought in to complete the look. We always try to accentuate the features of the home, and that particular home needed to be lightened.”

The pair brought in furniture with neutral tones to let the home’s details, including the rustic fireplace, touches of brick stand and coffered ceilings, serve as focal points. With the Biby’s help, the property ultimately sold for $1.4M.

“Home staging is how we tell the home’s story,” said Biby. “We have to convey the life a buyer could have if they lived in the home, so we have to create an environment that invites that. Seeing rooms that check the boxes or even gazing out windows and seeing a beautiful view just simply are not enough. Buyers want to envision themselves living in the space, and that’s what home staging does. Those details help them fall in love with the property.”

That’s how Showhomes has built the reputation for being the number-one home staging franchise in the country. The brand was founded in 1986 and today operates as a full-service home staging, management, update and renovation franchise with nearly 60 offices across 18 states. Showhomes caters to a wide range of clientele, but it specializes in working with property owners and agents in affluent suburbs and golf course communities. Showhomes seeks to expand its footprint in markets with minimum home prices of $500,000.

Showhomes COO Matt Kelton and the rest of the leadership team couldn’t be happier with the Bibys’ tremendous work on the Tebow project.

“The Bibys have a natural talent and passion that they bring to each project. The level of detail and care that goes into their work and supporting their clients — NFL player or not — is what we look for in franchisees,” Kelton said. “I have no doubt that if 2021 brings us more franchisees with the work ethic and dedication of the Bibys, we’re going to have an outstanding year, and so are our customers.”