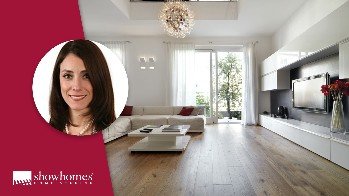 When Marisa Salas made the decision to join an emerging franchise called Showhomes a decade ago, she did so at a time full of uncertainty—and opportunity.

“I wanted a career change, but that was 2008. When the economy’s crashing, it’s not exactly a good time to reinvent yourself,” Salas laughed.

Salas had spent the majority of her career up to that point in the family business, which was jewelry. “My grandfather and father were both jewelers, and I operated one of my father’s two jewelry stores for 10 years,” she said. When Salas got married and moved from her native South Florida to New York, she continued her career in jewelry on the wholesale side. She and her husband eventually made their way back to Miami to be near family, where Salas took on a new role as the precious jewels manager for the luxury department store Neiman Marcus. After having children not long after, Salas’ priorities changed.

“After I had my kids, I decided the retail business was way too difficult due to demanding evening, weekend and holiday hours, so I took three years off to be at home with my family,” Salas said.

When she was ready to return to the workforce, she began seeking out new opportunities outside of the retail space, eventually discovering Showhomes. Salas and her husband had always been interested in franchising, and the young-but-growing brand presented the chance to get into an industry with a lot of potential at the ground level. Now 10 years later, Salas has established herself as a central part of the real estate scene in the South Florida communities of Coral Gables, Pinecrest, Coconut Grove and Key Biscayne.

“When I first became a Showhomes franchisee, it was strictly a home management concept,” Salas recounted. “Over time, we realized many people needed more, so we expanded our service offering to what it is today. In the beginning, I knew I needed another option to win more business, so I began offering staging services, which took off thanks to all of the new construction in my area. Eventually, Showhomes branched out into home restyles and updates, a part of my business that I’m starting to grow.”

Salas attributes her sustained success in the South Florida market over the last decade to the relationships she’s been able to form with realtors in her area.

“They’ve grown comfortable working with me and referring me to their clients, which has generated a lot of repeat business for me,” Salas said. “A lot of the realtors I work with have been partners for nearly 10 years. As their business has grown, I’ve been able to grow with them.”

It’s clear this strategy has spelled success for Salas’ Showhomes business—she was recently named Franchisee of the Year at the brand’s annual conference in August. A testament to her stellar work ethic and also her modesty, Salas said the award was “unexpected” and recognized her team as the lifeblood behind her franchise’s strong performance.

“I have a great team of people in sales and marketing and design that have allowed me to focus more on the business aspect of our work, which, in turn, has resulted in substantial growth,” Salas said.

What drives Salas in her work with Showhomes most of all, though, is thrill she gets from helping her customers move on to a new part of their lives.

“Our work plays a very important part in helping homes sell quickly, which gives people the chance to close a chapter of their lives and begin a new one,” she said. “The greatest joy in my work is the accomplishment that comes when an owner tells me that their home looks so great, they want to move back in.”

As far as advice goes for new and prospective Showhomes franchisees, Salas again pointed to how important hiring a reliable team with diversified skillsets is to establishing expertise in each of Showhomes’ offerings and ultimately, long-term growth. She also recommended tapping into the franchisee community for the support that she says guided her in the beginning.

“What I find with Showhomes is that we really are a community that helps each other out,” Salas said. “I remember when I started, other franchisees were generous with their time and it made all the difference. Now, I find people are looking up to me, and it’s incredibly touching and rewarding.”