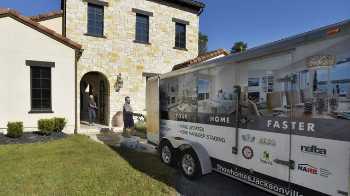 Jacksonville-area housing market may be sizzling, but ‘home staging’ can add thousands to sale price

While the housing market across the First
Coast and Florida is sizzling, those seeking to sell their homes probably
shouldn’t forget to properly stage their dwelling before they put it up for
sale.

Home staging is usually a professional service that
helps sellers design the furniture and accessories so the home
is more attractive to potential buyers. While houses are selling perhaps
at their most rapid pace in recent memory, some say homeowners could be missing
out on tens of thousands of dollars in additional revenue if their homes aren’t
staged properly, especially during the coronavirus pandemic.

“It probably helped to the tune of $25,000,” said Joshua
Downing, who recently sold his home in the Royal Palms neighborhood of Atlantic
Beach after having it professionally staged.

There were peculiar modifications to the
single-story ranch house that was originally built in 1960. So Downing said he
and his wife hired a professional stager.

“This house had the kitchen taken out and moved to an extension
on the back of it,” he said. “Where the carport had been, they
enclosed that area and made that into their living room and added an extra
bedroom.”The house sold within a month of going on
the market, and staging it no doubt made a big difference, Downing said.

Downing hired the contractor Showhomes Home Staging, a
Jacksonville franchise for a larger national company that has about three dozen
sites across the country.

The proof is in the pictures

Kaye Biby, owner of the local Showhomes franchise, said
many sellers are eager to forgo professional staging in such a hot housing
market. But that’s a mistake, she said from her office off Philips Highway,
where her company has a warehouse to store the furniture and goods they use to
stage homes and offices.

Staging for camera images has become one of
the most important facets of selling a home because the pandemic weighs
heavy on buyers who may not want to physically visit.

“Ninety-something percent of people initially look for homes
online,” Biby said. “Those pictures need to show the home in the best
light. For that to happen, the home needs to be staged, whether the homeowner
lives there or if it’s a vacant property.”

She acknowledged many people trying to sell
their homes simply never consider staging. Biby said the proof is in the
pictures.

“To be honest, all you have to do is look at some of the
pictures of homes for sale online,” she said, chuckling nervously. “It’s amazing
that there are still people who don’t understand the importance of staging.

“They think that it’s a hot market and they don’t need to stage
their home and they’ll get all these offers. Granted, they will. But staging
has proven over and over again that they will get a quicker offer for more
money and the buyers will be happier,” Biby said.

The house sold within a month of going on
the market, and staging it no doubt made a big difference, Downing said.

Downing hired the contractor Showhomes Home Staging, a
Jacksonville franchise for a larger national company that has about three dozen
sites across the country.

“It depends on the property,” Howell said. “I’ll make
recommendations to the seller as to decluttering, neutralizing and
depersonalizing.”

Howell is not a professional home stager, though she has taken
several home staging classes to help her understand what’s necessary to help
move a home sale.

“If it’s an empty house, it needs
personality. If it’s a house that has dated belongings in it, then there could
be some recommendations there,” Howell said.

The housing market may be the hottest it’s been on the First Coast
in recent memory. Home prices have reached record levels in the past year with
the median cost for a home standing at $307,230 in September, a record
according to the association’s data.

Even with the seller’s market, Howell said home staging should
not be overlooked, though the service can get pricey.

Downing said given the unusual layout of his Atlantic Beach
home, Showhomes was able to stage it with fitting furniture that Downing
acknowledged he wouldn’t have been able to figure out.

“When people walked in, they could see what
the bed would look like in the bedroom and what the couch would look like in
the living room with the fireplace going. It made a huge difference,” said
Downing, who paid about $2,500 for the staging services.

It makes a difference according to feedback from sellers, Howell
said. The National Association of Realtors produces an annual report that
focuses specifically on home staging, and in 2020 buyers would pay up to
20 percent more for a home that had been professionally staged compared to
other houses not staged and that was mostly during the pandemic.

Another data point in the
national report showed that 82 percent of sellers said staging helped the
buyers visualize the home as being their own. “It’s an emotional connection,”
Howell said.

Buyers are more sophisticated when looking at a potential home.
Biby said media focusing on home buying have upped the ante on that
sophistication level.

“There are numerous [television] shows on selling a home and how
a home needs to look,” she said. “People pay attention to that and
that’s what they want to see whenever they are looking for a property for
sale.”

Elements
to consider with staging and selling a home

• Curb
appeal is essential. “If they don’t like what it
looks like when they drive up, a lot of them aren’t even going to come
in.” Plant flowers, paint your front door, keep up lawn maintenance,
consider whetha mail box or a light needs to be changed.

• Neutralize
the interior of the house. Do not have different walls
with different colors. Uniformity of colors makes potential buyers feel more
comfortable.

• Management
of odors. Pet smells, food or smoking can drive a
potential buyer right out the door. Provide air fresheners but make sure the
smell is simple, clean and neutral.

• Limit
the amount of furniture and accessories. “They have to
declutter.”

• Stage
rooms for the purpose they were designed. A dining room
should show with a dining table. A bedroom should have a bed in it. A family
room should be a comfortable sitting arrangement with perhaps a TV. An office
should have a desk and working area.