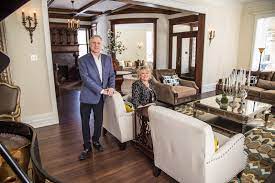 See inside the Oscar Mayer Mansion after massive makeover

EVANSTON — Opulence has returned to the Oscar Mayer Mansion in Evanston.

The woodwork, the antique light fixtures, the leaded glass windows and the stair case have all been restored to their original glory and then brought into 2017 with the help of Barbara Bliss of Showhomes.

Just last month Barbara and her team staged the home in hopes of enticing a buyer to the 7400 square foot, 2.65 million dollar property on Evanston’s Forest Ave.

Most of the 17 living spaces in the three story home are now decked out as it could be when a modern day family moves in.

In the meantime it’s Gary Kahn’s to enjoy and breathe life into.  Gary is the house manager for Showhomes.  He moves from home to home as they are staged and sold.  The Oscar Mayer Mansion is his 11th.

It boasts six bedrooms, four and a half baths, a ballroom, massive ceilings and a restoration totaling over a million dollars.